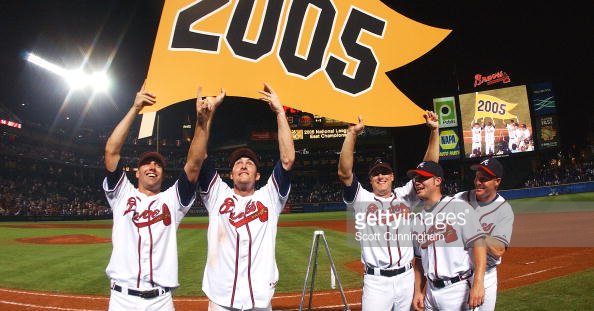 It’s a saying that’s become synonymous with John Schuerholz, notorious even. A stream of nonsense that has now been buried, burned, and discarded by Alex Anthopoulos in what was once known as “The Braves Way”.  There’s most definitely a rebuild going on and no matter how anyone wants to phrase those words, the fans, media, and anyone that has a half a brain knows that’s what has happened these past 4 years. I think the real problem lies in the words though and the unrealistic expectations that were put on upcoming prospects. And truthfully, I think Schuerholz, at the time, really did believe what he was saying. These words were seemingly first uttered in the 2005 season, the year of the Baby Braves, and the year that it was predicted the Braves would FINALLY end their division run.

That didn’t happen in 2005. For the Braves fans of 2018, it might have been beneficial the streak had ended that year, for our sanity, as we’ve been bombarded with sweet tea words for the last 5 years from the front office that could very well have been due to the circumstances that led to the success of 2005:  a group of prospects, not so heralded, come up, over-perform, and shock baseball.

Unfortunately for the Braves, it did come to an end in 2006. The Baby Braves didn’t live up to their unrealistic expectations and the Braves have only won one division title since.

But I’m not here to discuss the Baby Braves in general, merely 1 game that something pretty awesome happened…and I’m not sure it has happened in baseball since. On June 15th, 2005, the Braves played an interleague matchup against the Texas Rangers. Coming into the game, the Braves were 33-31 on the season, Texas 34-29. As we all know, the Braves would go on to win their division keeping the streak alive pushing it to 14. The Rangers would finish 79-83 on the year and a high-powered offense that featured Mark Teixeira, Alfonso Soriano, and Michael Young would be negated by a pitching staff that continued to be the Achilles heel of the franchise.

However, on this particular occasion, the Rangers  would come out on top putting 5 up in the 1st and never losing the lead despite their pitchers trying really hard to keep the Braves in the game. Altogether, it was a very forgettable game for the Braves in a very memorable season. But the result is only part of the whole that day as Bobby Cox, whether intentional or no, did something that likely hasn’t been done in baseball since:  He filled a lineup out, 1-10, that consisted of all homegrown players.

And not just homegrown as that term has been watered down by the trend of acquiring MiLB talent from other organizations and calling those players homegrown.  This was a team that had either been drafted or signed internationally by the Braves.

10 guys. All homegrown and didn’t feature either Chipper Jones or Jeff Francoeur. I’d be willing to bet that hasn’t happened since the 2005 season for any MLB team. I’d be interested in finding if it’s happened in any days since free agency has been implemented.

Challenge:  I’ve done no research on the matter at hand, but it seems unlikely that it’s happened in the last 12 years.  Can you find it?  I hope not…but I’m curious nonetheless.

I didn’t look at the last three years, but considering how frequently Coppy traded guys, I thought that it would be impossible to find a homegrown lineup.

Great work, but unfortunately the lineup Ryan discovered trumps yours based solely on the fact that his had a DH who was also homegrown, giving him 10 to your 9. I think that might be unique….

My first chance to see a Braves game in person was during the series you mention. The night my wife and I were there, the game was started by Tim Hudson. He was off that night. If memory serves he walked four and left the game with an injury of some kind. I remember being angry about missing Chipper (who had been injured and Marte was filling in for him). I knew that several homegrown players were playing, but I never picked up on just how many!

Thanks for the story Matt!

Can the Braves be 2018 Contenders? (Part 3 of 3)  Next Post :
Previous Post :   Atlanta’s Best Chance of Landing Christian Yelich