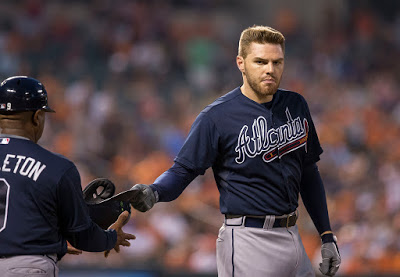 0 Comments   September 7, 2017 September 7, 2017  Stephen Tolbert By: Stephen Tolbert
You may have read that headline and thought this was going
to be a post defending or advocating for Brian Snitker as manger. This is not
that post. I don’t think Brian Snitker is particularly good at managing a
baseball team and given the choice between a good manager or bad manager, I’ll
take the good manager. But this isn’t the Braves problem. At least not their
main problem.
You win based on your talent level. There are other factors
that contribute to winning of course; luck, randomness but talent is the one most responsible and the one you can
control most, and therefore the most crucial. Managers often get the axe when things
don’t go well, creating this misconception that a great manager somehow holds the
key winning while a bad one will be your downfall. The reality is managers get
fired because that’s hell of lot easier than firing 25 players or firing yourself as
GM. It’s the path of least resistance. Let’s not mistake it for some monumental
change. A great manager adds maybe 2 wins to your team? A bad one probably cost about the same. There’s just not that much value to be had. And most a what a manager does isn’t seen or quantifiable anyways. No, what moves the
needle is talent. And the bottom line is Atlanta doesn’t have enough talent.
Not having enough talent and having a bad manager is akin to
having a broken pinky and a gun-shot wound. Yeah, eventually you’ll want to
address that broken pinky just because life is better with a fully functioning
pinky but it’s hardly the thing holding you back. The Braves have to get
substantially better on the field or what they have in the dugout will cease to
matter.
We’ll go position by position.

Freddie Freeman is amazing. This isn’t news. Get him healthy
and first base is taken care of for the foreseeable future.
Ozzie Albies looks like the guy he’s been billed to be the
last few years. Dynamic, young, a little more powerful than he may appear to have and very likely the second baseman of the future. You’re set there.
Shortstop is where it starts to get a little fuzzy. Dansby
Swanson has eased the minds of a lot of Braves’ fans with the way he’s played since
returning from demotion but the overall numbers are still bad. Him turning into
a solid, everyday player would go a long way for the organization and he’ll at
least get every opportunity to do just that.
Third base is a black hole. I wrote a couple weeks ago about
Atlanta’s struggles finding a 3B since Chipper Jones retired and they haven’t
solved them yet. Plenty of people will tell you Johan Camargo or Rio Ruiz will
fill that spot but I’m not sold on either one as an everyday guy. You could potentially look at a platoon here but this is a spot
I think Atlanta needs to be looking at serious upgrades. They could change the
dynamic of the their whole lineup if they go and get legitimate guy for third
and use guys like Camargo and Ruiz for the bench.
Right field is a weird problem. I say weird because Atlanta
has an elite talent ready to step in and take that role for the next decade in
Ronald Acuna. But they have a tricky path in clearing space for him. Nick
Markakis is still under contract for next year at around 11M and has shown yet
again this year he isn’t worth giving a full-time job too. His contract is
underwater at this point and the Braves will almost certainly have to eat a
chunk of it to move him. I’d like to say that’s certainly what they’ll do but
this front office has already had to convince ownership to pay players while
they play for another team and there may be more coming after Markakis so how
they handle this will be interesting. Whatever they do with Markakis, bottom
line is right field needs an upgrade which means Acuna needs to play.

Center field is set. Ender Inciarte is tremendous and there’s zero
reason to mess with that position at all. Moving on.
Left field. Oh boy. This is the biggest headache facing
Atlanta, at least among position players. Matt Kemp is a replacement level
player making a ton of money and signed for another 2 seasons after this one. He’s absolutely, 100% not an outfielder anymore and should be playing out the
rest of his career as a DH in the AL. Problem is how to get him there. Teams
aren’t lining up to trade for a guy putting up his numbers, making his salary
and this is another scenario where Atlanta most certainly will have to eat a
large portion of the contract to move the player. I just don’t know how much of
this ownership is willing to do. Atlanta is a small market team when it comes
to payroll. They have a hard enough time competing with the big boys when all
their money is going to people playing for them. Paying guys to play for
someone else gets old and there’s only so many times you can go to that well.
However they do it, though, LF is spot in desperate need of real talent, and at least
for now, there doesn’t seem to be a way to achieve that.
Catcher has the been the brightest of bright spots this
year. Both Tyler Flowers and Kurt Suzuki have been way better than advertised.
Flowers is under contract next year for a steal at 4M while Suzuki becomes a
free agent. Suzuki has done enough this season to warrant a starting job next
year which I bet he gets so my guess is Atlanta will have to find a decent back up
somewhere. But given Flowers’ production as well as the other issues facing the
team, this is one I’m not too worried about. Though I guess if we’re being
prudent, we should assume Tyler won’t have the same BABIP luck next year and
should expect a regression in his production but like I said, Atlanta has
bigger fish to fry. If catcher is the biggest problem they have next year, then
they’ve done a hell of job.
Starting pitching is most definitely a sore subject in the
Braves offices at the moment. Atlanta comes in to tonight’s action with a
starter’s ERA of almost 5. (4.90) This after Atlanta spent almost 30M in the
offseason on three veteran starters that were supposed to stabilize the
rotation. Combine that with the 5 or 6 SP prospects that have already debuted with
average results and you can believe starting pitching will once again be the
main priority this offseason. It’s easy to just say let kids pitch but each one
of the guys that have appeared so far has major red flags in their profile.
Whether it’s not missing enough bats, not being able to get opposite handed
hitters out or having serious command issues, it’s probably not wise to trust
an entire season’s worth of innings to just prospects. Bottom line is Atlanta’s
starters have produced a combined total of 5.4 WAR this year which will end up
being behind several individual pitchers. There is no spot on the field where
Atlanta needs to see a greater jump in production than starting pitching.

If starting pitching is the number one problem then the
bullpen is number two. Braves are dead last in the NL in bullpen production and
29th in all of baseball. The principal problem is Jim Johnson who is
owed over 4M next year while producing a 5.81 ERA this year and ultimately
being removed from the closer’s role. Braves have shuffled guys in and out all year with the overall results being poor. There have been some bright spots in Sam
Freeman and Arodys Vizcaino as well as younger guys like Akeel Morris and A.J.
Minter so not all is lost. Combine some of those guys with starters like Lucas
Sims who probably becomes a reliever and there’s something to build on. But
production has to go up. It’s almost impossible to achieve anything of worth in
a baseball season while having one of the worst bullpen in the league. Unless
you’re the Nats.
The bench has been one of the bright spots for the 2017
season. What started as a major weakness with names like Emilio Bonifacio and
Chase d’Arnaud has evolved to include guys like Camargo, Ruiz and Lane Adams. I
think Atlanta can put together a decently competent bench with just internal
guys assuming they go outside the org to fill certain starting jobs. We’ll see.
So there you go. A lot of work to do. I count SS, 3B, LF, RF,
SP and RP as areas Atlanta needs serious production increases. Some of that
will happen internally of course. Dansby can bounce back, Acuna could be the
starting RF, some of the starters could take a step forward, etc. But those
steps forward aren’t guaranteed and should never be assumed. Especially the
pitchers. It would be unwise for the Braves to leave all of this needed
production up to young players. They need external additions as well. Probably
at 3B. Probably in LF. Probably somewhere in the rotation.
And yes, it be nice
if they had a fully competent manager. Snitker is a problem but as the title says he isn’t the problem. They could stand for an upgrade in the dugout, no doubt. But having a working pinky isn’t worth
much if you died from that gun-shot wound.