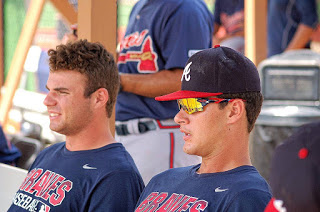 In this new series, Ryan Cothran and I have a back-and-forth as we discuss a subject. It’s informal and we hope you guys get something out of it. This week, we’ll look at rising and falling prospects using the Walk-Off Walk Top 50 preseason list as a guide (link takes you to posts about the Top 50). At times, we’ll agree. Other times, we’ll disagree. Join the conversation and tell us where we are misguided in the comment section.

It’s hard not to be smug when talking about the farm system the Atlanta Braves have put together. From trades to acquire even more talent to the smart utilization of the draft to maximize both quality and quantity to a recommitment to the international market – and even holdovers from the Frank Wren era like Lucas Sims and Ozzie Albies – the Braves organization is full of not just depth at a number of positions, but talent that has impact potential. Today, I wanted to go over some of the guys that have increased their stock over the first two months of the season. At the same, we can’t ignore the players who are falling down the prospect rankings. To be fair, some of that is due to the first category – the guys pushing their stock up. But there are a few – yes a few –, that have struggled to this point.

I’m going to use my Top 50 as an outline here. Hey, since you’re a full-fledged member of Walk-Off Walk, I guess you are going to have help me with the midseason rankings. Just know that while I value your opinion, if it doesn’t agree with mine, it’s wrong.

Let’s get on with it. #46 Bryse Wilson is kind of the forgotten arm from last year’s class and not only because I keep forgetting to spell his name with an “s” rather than a “c”. A fourth-round pick, Wilson dominated in the Gulf Coast League, but remained firmly in the shadow of Ian Anderson, Joey Wentz, and Kyle Muller. Yet, it was Wilson, not Muller, that jumped from the GCL to the South Atlantic League to open 2017. He hasn’t been as good as Wentz and Anderson according to FIP, but he’s still been damn good. A lot of pre-draft analysis strongly hinted Wilson could be a bullpen guy, but the Braves wouldn’t have picked a high school arm that high (#109) to be a bullpen arm. They thought they saw something in him that maybe others didn’t. So far, they might be right.

He’s one of the guys I expect to climb up the midseason list considerably. While I have only done a little prep work for it so far, do you expect a Top 30 placement for Wilson?

When looking at a list that has some of the best pitching prospects in the game, it’s easy to see Bryse Wilson and simply pass him over.  However, he’s making a believer out of me with a fastball that sits 93-95 MPH, can climb as high as 97, and has staying power throughout his starts. Did I mention he’s still two years away from being able to buy a beer legally in the states? Like many young ones, he’s self-admittedly needing to develop his offspeed stuff. He features both a slider and a changeup, but neither are a plus pitch yet. With so many starting pitchers seemingly in front of him on the depth chart, one could see Bryse being converted to an elite relief pitcher where he can feature his fastball that I’d bet could run up to triple-digits in due time. With 58.2 innings of really good baseball under his belt at Rome, accompanied by both a low-BB rate and a high-K rate, I’d say he’s most definitely a big mover up the list on a loaded system, and could be a quick mover after the 2017 season.

I agree about Wilson completely. I feel almost ashamed that I under ranked him, but that gives him the opportunity to slide up these rankings considerably by midseason.

On the other hand, #36 Connor Lien is likely completely out of the Top 50. He, like Randy Ventura, was a guy I grew to love in 2015. Unlike Ventura, though, he’s only gotten worse. Back in ‘15, he slashed .285/.347/.415 with incredible defense. While it would have been difficult to predict stardom based on his numbers, there was enough value here to predict a 2-3 fWAR season once Lien was established in the majors.

But that hope is a pipe dream now. He wasn’t terrible during an injury-shortened 2016, but has fallen off the map this season with a strikeout rate hovering around 40%. Even Rob Deer and Mark Reynolds are telling him to make some contact. Things were so bad that he spent a week at extended spring training to try to clear his head. Unfortunately, it appears like Lien’s prospect status has completely eroded or am I wrong?

I cannot argue here, but I can also brag on myself a bit: I never bit on Lien and I have Chris Johnson to thank for that.  The year of Lien’s breakout was 2 full years after the infamous .394 BABIP. Lien’s was .379 in 2015, and even with that, he didn’t break an .800 OPS. However, guys around Tomahawk Take were blowing up his defensive abilities and that combined with his speed made him a nice under the radar prospect. When Braves chose to leave him unprotected for the Rule-5 draft and he went unclaimed, it told me that no matter how great of a defensive Gandalf he could be, he’s just not going to be a big league commodity. As one can see this year, when his BABIP gets in the “league average” range, the offensive results are poor. You’re right in removing him from the list. Hopefully, for Lien he can turn it around…baseball is hard.

Indeed, baseball is very hard. Sometimes, I admit I let my personal feelings overrule the logic side of me. I loved watching Lien in 2015. Still holding out hope he sells his soul for another BABIP-inflated season. It was kind of fun to watch the first time.

Onto a happier subject, Cristian Pache turns 19 next November, yet he’s handling the South Atlantic League like a guy a few years older and with more experience than 57 games at rookie level. When Pache and Derian Cruz signed back in 2015, it was Cruz that garnered more accolades, but early in their careers, it’s Pache who looks like a real prospect.

He’s still learning to utilize his speed, but he’s got the wheels to do some big things. So far, he’s stolen 15 bases and has been caught just four times. But what really intrigues me is the potential pop in his bat. He has a big leg kick before driving forward in the box with a bat that explodes through the zone. It hasn’t produced much in terms of real homerun power to this point, but the smart money is that he’ll start popping a few in the near future. I had him ranked #26th coming into the season and he might not break into the Top 20 just yet – which is not a slight against him, but a representation of the talent throughout the system. Regardless, I have been impressed with a guy who only has five plate appearances during his brief career against a pitcher younger than him. Oh, and hey, he has elite center fielder potential in the field. Not that the Braves don’t already have one of those, but it’s great to keep cranking them out.

Despite the big leg kick, he’s only striking out about 19% of the time against older and more experienced pitchers. The improvement in his walk rate (5.5% to 8.3%) is also exciting is as I look for progression in rate stats as a tell-tale sign of a rising prospect. So, my question is this, Ryan…how much power do you project Pache developing? I think he can be, at worst, a .150 ISO guy if he progresses like we hope he can. Is that too much to expect?

The body, the frame to grow into, the speed…it’s all there. But really, the numbers aren’t. In 465 plate appearances, not a single dinger.  What gives? I’ve got a theory, but let’s hold off a bit.

The positives, there’s much to like here as his speed, defensive efficiency, and ability to get on base is what’s driven his prospect rankings and like you stated, these skills are standing up* against competition older than him (it seems like we say this about every Braves prospect these days).

*Albeit, his .707 OPS leaves me wanting more and his .364 BABIP likely isn’t long-term sustainable

But the power? Many would think just by looking at his numbers that he must be a wiry kid, but that’s not the case. He’s 6’2, muscular, 185 pounds, and growing…so again, where’s the power? In the samples that I’ve seen (you can see it on YouTube, but I also subscribe to MILBTV so I’ve seen a15-20 more ABs than the norm) Pache seems to have a problem with weight distribution. So many times (to the point it seems intentional), he gets caught out on his front foot which all but crushes his ability to drive the ball. At this point, I feel it’s a habit he has to break that he probably developed early in his career to utilize his speed and get out of the box quick turning singles into doubles and doubles into triples. If he can stay back on the ball and generate the needed power from his legs, look out! Adding power to his game is the last thing that’s holding this kid back from being a 5-tool athlete on the heels of Ronald Acuna, but it’ll take a lot of time in the cages to work out an old habit that’ll likely take a while to die hard.