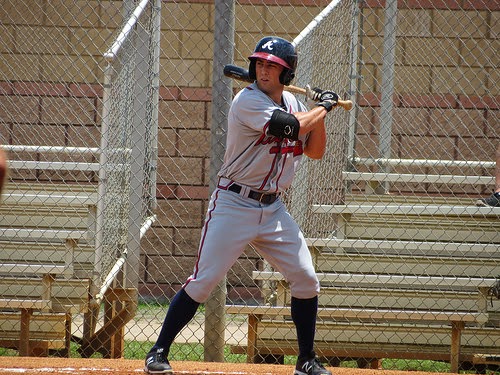 Do you know anything about the typical rating scale that is used by baseball scouts? The scale runs from 20 to 80. The higher the rating, the better the skill or its potential. For example, Christian Bethancourt‘s throwing arm might be rated a 65 or 70. That would rank as an elite number, though there is room for catchers with better throwing arms. Craig Kimbrel‘s spiked curveball might be rated as a 75 – maybe even an 80. On the flipside, Eric Young Jr.’s power might carry a 20 rating. The scale provides more detail than a simple 1-to-5 stars system that us video game players love to utilize.

Why mention this? Because today’s Random Prospect has a skill that has been ranked as an 80 – elite of the elite. His name is Joseph Daris and he might be the only player in the system who can outrun Mallex Smith.

Born November 22 in 1991 – or less than a month after the Braves dream season ended in Minnesota – Daris attended El Camino High School in Oceanside, California, before setting his sights on a continued run with baseball via the Azusa Pacific Cougars. The Christian university, located in the suburbs of L.A., has produced a few recent ballplayers like Kirk Nieuwenhuis and Stephen Vogt, though these names pale in comparison to the great Austin O’Brien. You know…the kid from Last Action Hero, which is quietly one of Arnold Schwarzenegger’s best flicks. And it had Tywin Lannister in it. Seriously, if you haven’t seen it, you should get on top of that, Rose. And watch Don’t Tell Mom the Babysitter’s Dead, too.

Daris was a former running back in high school and I imagine he filled the role of a scatback, the type of back you use on sweeps to the edge to let his athleticism and speed take over. Baseball America, in a review of the 2014 class, referred to Daris as the best athlete from the Braves’ selections. Atlanta really went heavy into Cali last June, by the way. In addition to Daris, there was Luke Dykstra from Westlake and Caleb Dirks from Cal Baptist University.

How special was Daris’s speed? It got him drafted and not just in “eh, I’ll take a flier on this guy” territory in the 27th round when teams select sons of scouts. No, Daris was picked in the 14th round, or the 433rd overall pick. It’s not that the selection was so much a reach (BA ranked him 476th before the draft), but the only reason he was even in anyone’s mind was because he was so fast. He did hit well at Azusa Pacific, though hitting well in the PacWest Conference against the likes of Holy Names University and Chaminade University of Honolulu isn’t exactly on the level of the SEC or Big 12. As an amateur, Daris showed a little basestealing ability, though you’d like to think someone with his speed would swipe more than 15 bases his senior year. He has the speed to play center field, but the instincts and arm that must be hid in left field.

How has this worked so far as a professional? Daris opened up his career in the Gulf Coast League, which had to be a little disappointing. At 22, Daris was a couple of years too old for the league and spent most of his time facing guys who only a few months before had been at their Senior Prom. To his credit, Daris hit in the GCL, though doing something you’re supposed to be easily capable of doing does little to impress. After a couple of weeks, the Braves moved him to Danville and he would finish the rest of his first year with them. He hit just .264 and of his 33 hits, just two went for extra bases. Also, despite the speed we keep being mesmerized of, Daris stole just 7 bases in 11 tries. Interestingly, despite a .360 OBP over the final month of action, Daris was just 1 for 3 in stolen base tries. Maybe he was dealing with a nagging injury?

Daris received little press coming into the year – even among 2014 draftees. He was just another guy looking to make something happen. He started the year in Rome and remains there. So far, counting last night’s efforts, Daris is hitting .208 on the year with a double, two triples, and 16 K’s in 60 trips to the plate. He’s walked six times and stole his fifth base last night while being caught just once. After playing almost exclusively in center last year, Daris has spent this year in left field. Unfortunately for him, you’d like to see a outfielder with 80 speed be capable of playing center field, but if the instincts aren’t there, it’s better to find another place for him.

Also unfortunately for Daris, left fielders need to be able to hit and that is where Daris runs into issues. He’s showed decent enough on-base skills, but as a slash hitter without any pop, his time is pretty limited. While speed is more valuable in today’s game, you still have to hit. The Braves can afford to be a little patient with Daris, but 23 year-olds hitting ninth in low-A ball don’t typically turn into big prospects. Still, if you get a chance to watch him, look for his speed from home-to-first. He should make any slight bobble by an infielder interesting.