Many prospects I cover in this section are drafted or initially signed by the Braves, but that isn’t the case with this week’s random prospect. David Nick was born in Cypress, California on February 3rd, 1990 and went to high school there, likely playing with 2007 third overall pick, Josh Vitters. Nick graduated from Cypress High two years later and was picked in the 4th round by the Diamondbacks. Deciding to forgo college at UCLA, Nick signed for $225,000 and joined the D’Backs. During his time at Cypress, Nick was a 2009 Rawlings All-American. 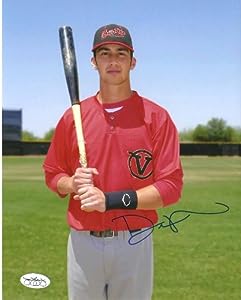 A shortstop in high school, Nick moved to second base to open his minor league career, which he began at Missoula in the Pioneer League. He slashed .286/.351/.440 with 18 doubles, six homers, and 16 steals. The production was similar to what the Diamondbacks were expecting from Nick’s bat and athletic capabilities. His defense wasn’t very good at second, though, and that would continue to be an issue as he advanced in the system.

His numbers took a bit of a fall in 2010 while playing in South Bend. He slashed just .251/.318/.366, striking out a career-worst 97 times. He looked exposed and his defense remained a work-in-progress. Yet, he was promoted to high-A Visalia in 2011 and rediscovered his stroke, putting up his best season. He batted .300 with a .791 OPS while finishing tied for 8th in the California League with 35 doubles. While remaining at second base, again, the defense wasn’t as good as the D’Backs could have hoped.

The expectations were much higher for Nick entering 2012 than they were entering 2011 after his productive season, but he again took a sharp step backwards, hitting .249 with a career-worst .637 OPS. He only had five homers and while he did steal 13 bases, he simply was not able to produce at Mobile in the Southern League. He was slated for a return trip to Alabama last year and for a month, he simply got worse, hitting a miserable .188 in 21 games. He went back to Visalia and hit a little better, but didn’t have a season comparable to his 2011 campaign with Visalia. The D’Backs also moved Nick to the outfield in 2013, mostly playing left field. Injuries ended his season in mid-July.

2014 was a make-or-break season with the Diamondbacks for Nick and by the end of spring training, he was cut in the favor of younger, more deserving prospects. It took Nick a month to land anywhere and the Braves came calling, signing the west coast talent in early May and assigning him to Lynchburg.

Playing outfield for the Hillcats, Nick has hit well in his first taste of the Carolina League. In 31 games entering Saturday’s action, Nick was hitting .293. However, muting his success is his lack of pop (.388 SLG) and his age (24 years old now). In fact, of his 125 PA, all but 25 have come against younger pitchers. Nevertheless, Nick has often been slotted in the three spot, batting behind the duo of Jose Peraza and Kyle Wren. The ‘Cats don’t have much power in general so that batting order isn’t too surprising.

Nick is known for an unusual batting stance. He doesn’t wag the bat or anything. Instead, his stance is a throw-back one where he spreads his feet and holding the bat high above his shoulder while remaining motionless until the ball comes. Unfortunately for Nick, his batting stance has been really all he has been known for right now. A fourth-round talent who, despite over 500 games in his career, is back at high-A is not going to excite many. Nevertheless, Nick could be a sleeper to keep an eye on, especially if the pop returns. If he can get to Mississippi this season or even next and start to hit there, he could improve his stock. That said, his move to left field from second base will limit his potential.