Two more teams to look at in the run-down of the “Other” 1995 Atlanta Braves teams. Up this week is the Greenville Braves. Beginning in 1984, the Braves had been in Greenville starting that year, young Braves prospects had climbed from Durham to Greenville to Richmond, which is consistency that is rare nowadays. The Braves would remain in Greenville until moving to Pearl, Mississippi in 2005. 21 years in Greenville and many of the G-Braves were better than the 1995 edition, which was one of the worst teams in the league.

In the manager position for the G-Braves was Bruce Benedict, the long time Brave who was showered in the 80’s at Atlanta-Fulton County Stadium with a chorus of “BRUUUUUUUUUUCE!”  After retiring, Benedict became a coach and manager in the Braves system for three years, including 1994-95 with Greenville. He would spend one year managing Norfolk for the Mets organization in 1996, but transitioned into scouting. After time with in that position with the Mets and Cardinals, he currently serves as a White Sox scout in the Atlanta area while operating his own baseball academy. 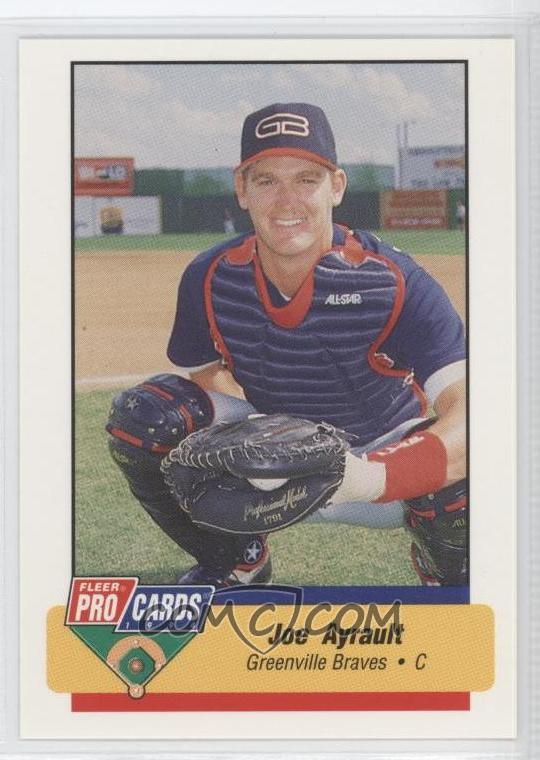 His primary catcher in Greenville in both years was Joe Ayrault, a right-handed hitter catcher in the Benedict mold of defense-first, offense-optional. Ayrault briefly made it to the majors with the Braves in 1996 for a seven game run as a defensive replacement in late innings. He went 1 for 5 with a HBP with a single off future Brave, Chris Hammond. His claim to fame was being the “third catcher” in the postseason roster as Bobby Cox never liked going into the postseason with just two catchers. Ayrault would give up his major league dream in 1997 and, amazingly, became a hitting coach. In 2007, he eventually became a manager for the final three editions of the Sarasota Reds. He moved on to the Brewers organization in 2010, managing Helena for two years and Brevard County for the last three.

A variety of options played at first base. Greg Sparks, a 31 year-old playing his final games for an MLB organization, posted a .660 OPS in 65 games before the G-Braves moved on to other options. After a run in Mexico and the independent Texas-Louisiana League, Sparks was finished with over 1300 games played in professional ball and no trip to the Show. Raymond Nunez, who began the year with Durham, smacked nine homers in 81 games to provide a more useful bat at first than Sparks. He spent one more year in the Braves organization before trying his luck in the Cubs system. After two years with them, he played five years in Mexico, hitting 47 homers, but never coming north. Most recently, he managed in the Marlins Dominican Summer League between 2010-12.

The little engine that could, Marty Malloy, handled second base duties for most of the season, hitting .278 with a career-best ten taters. He would play four more seasons in the Braves organization, mostly at Richmond, and got an eleven game run in September of 1998. In his first game in the bigs, he started at second and batted second. After striking out in his first at-bat, he hit a solo homerun off Rick Reed in the third, his only homer of his major league career. Malloy spent 2000-2001 with the Tigers and Reds minor league systems before making the Marlins roster in 2002. He only hit .120 and was released, picking back up with Reds to finish the year in their minor league system. By the end of 2003, his playing career was over with 1201 games played in the minors.

A young infielder who was already in his third organization, Pablo Martinez got the lionshare of games at shortstop and the weak-hitting Dominican actually had a pretty good season in 1995 with the stick compared to his career. He hit .255/.313/.353 with a career high of 22 doubles. He would spend two more seasons with the Braves organization, including a four-game callup in 1996 where he picked up his only major league hit, a single in the 16th inning against the Dodgers. The Braves eventually won it 5-3 in 18 innings. Martinez would land in the Milwaukee organization to start 1998 and after a ten game run in independent ball, he came back to the Braves through midseason 2000. However, he never got back to the bigs after 1996. After a year with Somerset in the Atlantic League, Martinez’s career was over after 2001.

At third base was the #75th best prospect in baseball, according to Baseball America, former 1992 eleveth rounder Bob Smith. He had projection-able power and good speed with plenty of youth. The 21 year-old slashed .261/.331/.430 for the G-Braves with 14 homeruns. He would follow that up with a pair of underwhelming seasons at Richmond before becoming the 12th selection of the 1997 expansion draft by the Tampa Bay Devil Rays. He spent all of 1998 with the expansion Rays, hitting 11 homers and batting .276. A feisty third baseman who once got suspended after a fight with Jorge Posada, the D-Rays had hope that Smith would man third base for several years. Subsequent seasons were not nearly as good and in 2002, the Rays cut him after a .466 OPS in the first month of the season. He tried his luck in four different organizations, but only padded his AAA stats. By 2006, he was out of baseball.

While two outfield slots were occupied for almost all of the season, left field in Greenville was a mix of four players with Troy Hughes, a veteran of nine minor league seasons, getting the majority of starts. Hughes originally got to Greenville in 1993 and posted a .796 OPS. He failed in Richmond the following season, receiving a demotion, and was back in Greenville to open 1995. He posted a .707 OPS before the Braves sent Hughes to the Yankees for Luis Polina, who would help the Braves to their ’95 Series victory. Meanwhile, Hughes languished in AA for the Yanks, Cubs, and A’s organizations, ultimately seeing his career end after 1997. Juan Williams blasted 15 homers for Greenville in 1995 while playing left and DH. After 62 games and a 1.010 OPS, Williams received a well-earned promotion to AAA but he never got to the majors from there, even after playing for Boston and the Cubs. His career ended after an 18-game run with Allentown in 1999. I wrote about Pedro Swann last week, but he also got 15 games for the G-Braves in 1995. Finally, there was Mike Warner, who was a major disappointment after posting back-to-back .900+ OPS seasons as Warner posted a .705 OPS in 1995. Warner would play in the Dodgers and A’s organizations after the Braves let him go after 1998, but spent most of the remainder of his career playing independent baseball. He was done by 2003.

In center field was the #99th prospect in baseball, Damon Hollins. A right-hand hitting, left-hand throwing outfielder from Vallejo, CA, Hollins was only in his fourth professional season and second full season, but the 21 year-old did hit .247 with 18 HR. He would gain fame for two different stints in Richmond between 1996-98 and 2001-2004, earning the nickname “The Mayor.” He briefly made an appearance with the big league club in 1998 before being dealt to the Dodgers in September. He got back to Atlanta in 2004, going 8-for-22. After the season, he left the Braves for the Rays and received his most extensive playing time in the majors in 2005-06, playing in 241 of his career 256 MLB games and bashing all 28 of his homeruns while serving as a fourth outfielder in Tampa. They non-tendered him after the 2006 season and he headed to Japan, where he hit 12 homers for Yomiuri. He tried to get back to the majors with the Royals and Phillies, but after failing to make the latter in 2009, his career was done.  He hit 71 homers for the Richmond Braves. Another California native, Jermaine Dye, manned right field for the Greenville Braves in 1995. The #88 prospect in the game increased his value with the G-Braves by slashing .285/.329/.481 with 15 HR as a 21 year-old. Dye would head to Richmond in 1996, but didn’t stay long. An injury to David Justice brought Dye up in mid May and he finished sixth in the Rookie of the Year balloting while slashing .281/.304/.459. After the season, the Braves made the unpopular decision to ship Dye out to the Royals in the Keith Lockhart/Michael Tucker trade. It took Dye three seasons, but he broke out with the Royals in 1999, bashing 27 homers and posting an .880 OPS. From there, he became a very good regular player for the A’s and White Sox after his time in KC was done. He didn’t get a deal he liked after 2009 and just before the 2011 season began, Dye decided to hang them up with a career .826 OPS in his 14-year career.

The G-Braves staff was led by a bunch of no-names, though 23 year-old lefty Darrell May started 15 games. Despite a 3.55 ERA and a 1.11 WHIP, May had a 2-8 record when the Braves promoted May to Richmond to finish the season. May, a former 14th rounder by the A’s, was actually a 46th rounder by the Braves before he signed and expectations were low, but like Trey Hodges would do a few years later, his minor league numbers were good because he was smart and had good control. May finished 1995 in Atlanta with a pair of meh-outings. After failing to make the Braves roster in 1996, he was waived and picked up by the Pirates. He would pitch for both the Pirates and Angels in 1996 and allowed 12 ER and 6 HR in 11.1 ING. After another year with the Angels with little positive results, May headed to Japan to refine his game. He spent two seasons with Hanshin and two more with Yomiuri, including a great 2000 campaign where he finished with a 2.95 ERA and three shutouts in 24 starts. May came back across the Pacific and landed in Kansas City for three years. A pretty solid 3.77 ERA and 1.19 WHIP over 210 innings in 2003 was sandwiched between 5.00+ ERA’s in 2002 and 2004, including a league-leading 19 loses in 2004. The following season, May tried to hook on with the Padres and Yankees, but pitched poorly. He got one last shot with the Reds’ AAA team in 2006, but was released on June 1st and his career ended and he became a high school baseball coach in Texas. Former 3rd rounder Carl Schutz, a left-hander out of Southeastern Louisiana, followed up a 20 save season with Durham in 1994 with 26 in Greenville in 1995. However, he had control problems and it derailed his career from taking off. He did appear in three games with the ’96 Braves, striking out five in 3.1 ING while surrendering a run. He spent the last year-and-half of his career in the Cubs system.