The Random Prospects series returns with a pitcher.  With 122 pitchers listed under the B-R page, random.org gave me number 109.  Matt Talley.  Four prospects in, I have two catchers and two lefties.  This series is exciting! 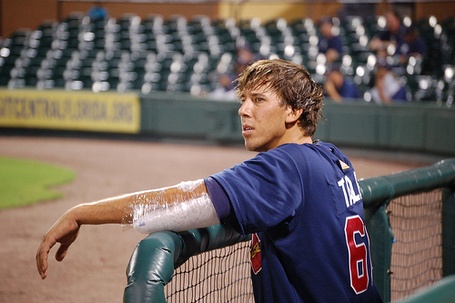 Not sure what’s going on with his left arm in this picture.  Guess it wasn’t feeling too well.  Anywho, Talley is a 22 year-old from Sumter, South Carolina who will turn 23 in exactly one month.  After graduating high school in 2007, he stayed close to home and attended The Citadel for four years, making 48 starts along the way.  It’s tough to get an easy four year read-out on his numbers as a Bulldog, but Talley appeared to have carved a niche out as an okayish arm with a great pickoff move.  In his freshman year, he picked off nine runners in 15 outings.  In 2009 as a sophomore, he went 8-1 with a 3.42 ERA, including a 2.18 ERA in conference play.
His junior season in 2010 was capped off by an All-Tournament Team selection for the NCAA Regional in Columbia.  He matched his eight wins in 2009 and had the ninth-longest scoreless inning streak of the year with 20.1 innings.  He tossed a pair of shutouts, had a no-hitter going into the seventh for his first win, and was on the mound for the conference-clinching win against Georgia Southern.  Another highlight came in the Regionals when he threw seven solid innings as The Citadel upset #16 Virginia Tech 7-2.  In June of 2010, the Diamondbacks selected him with their 25th round pick, but he did not sign.
Tabbed as the ace in 2011, Talley did not have nearly the season he had hoped for.  He struggled in his first two starts before missing nearly a month due to injury (I assume).  The pick for preseason Conference Pitcher of the Year picked up a pair of complete games once he came back, but finished just 3-7 with a 3.95 ERA.  He picked up 72 K’s in 82 innings and was picked with the 866th overall selection by the Braves.  Essentially, he returned and got his degree in civil engineering, but fell three rounds in the draft.  He was the second pitcher the Braves had plucked in recent years from The Citadel.  Matt Crim logged three seasons in the organization, but was cut before this season after stalling in A-ball.
The southpaw appeared in games for three different affiliates last year, but spent the bulk of his time with the GCL Braves.  In 12 games, including six starts, Talley finished with a 2.95 ERA and a 1.17 WHIP to go with his 3.34 FIP.  The GCL Braves finished 10 games under .500 so his 1-3 record is hardly a slam on his efforts.  He received a late August one-game appearance out of the Danville pen and pitched poorly, walking a pair and giving up a pair of hits in one two-run frame.  Still, he appeared in the second-to-last game of the year for the Lynchburg Hillcats and gave up three runs in the first three innings, but limited the damage from there and after 5.1 innings, he left with a 4-3 lead on the heels of a three-run homer by Joey Terdoslavich and an inside-the-park homer by Keenan Wiley.  The ‘Cats would give up the lead to rob Talley of his first class-A victory.  He gave up seven hits and a walk while striking out no one.
Talley is the case of an older college pitcher who, if he is to stick around in organized baseball, needs to accelerate up the ladder quickly.  This year, the results have been the opposite.  After either an injury or simply not making the Rome roster out of camp sapped Talley of the first couple of months of the season, Talley finally made his season debut on June 7th with two scoreless innings and 3 K’s out of the Rome pen.  Over his next three appearances, he gave up eight runs (three earned) and struck out three to five walks.  He was re-assigned to Danville and after a pair of decent outings, he walked three in his last one.  Overall, in seven games, Talley has 13 strikeouts to nine walks in  13.2 ING.  When he’s not missing bats, they are finding holes as he has been roughed up for 20 hits.
The rest of this summer is very important for Talley’s chances at being in the organization next season.  When you are already 22 and you can’t stay out of rookie-ball, your future has issues.  Talley’s a lefty so those guys can stick around, but with nothing to set him apart outside of what arm he throws with, Talley’s place on the depth chart will be at the bottom if he’s not producing.  Being that he was a 28th round pick, the Braves have little investment in his future and he’s being lapped by this year’s draftees.  His time to sink or swim is now.