When someone does what Aaron Northcraft did Friday night, they need not wait and hope to randomly be chosen as a prospect to write about.  Northcraft, starting his 14th game of the year for the Lynchburg Hillcats (A+), quietly tossed the first no-hitter of his professional career against the Salem Red Sox.  In full disclosure, Northcraft’s no-hitter was shortened to seven innings because doubleheaders in the minors typically are shortened to avoid too much stress on the pitchers.  Still counts, though.  All told, Northcraft faced three above the minimum because he walked a pair of hitters and hit a batter, but Northcraft K’d ten batters.  He induced eight ground balls to one flyball.  One ground ball was booted by Matt Weaver and the ‘Cats turned a double play.

It was a great night for the Hillcats, who won the first-half title in the Northern Division.  After a rain-out last night, they opened the second half with a double header sweep of the Red Sox.  In the first game, Weaver laid down a bunt that ended an 11 inning game with a squeeze. 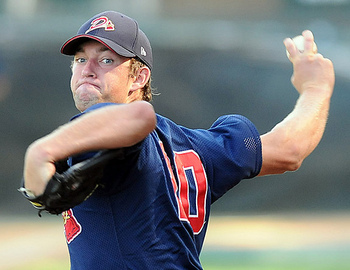 Northcraft was drafted by Atlanta in the tenth round during the 2009 draft.  Mike Minor is the only Brave to make it to the bigs so far from that draft, though David Hale has some nice stuff.  He signed for a $125,000 bonus, the sixth highest bonus among 2009 tenth-rounders.  He was the first guy drafted out of high school by the Braves that year, which spoke of philosophical change the Braves had moved toward at the time.  Northcraft is a California-native who, when drafted, was considered a guy who projected very well, could touch 91 mph on his fastball at 19, and already had a nice hammer of a curveball.  At the time, he was also considered a solid outfield prospect with big-time raw power.  However, the Braves liked him on the mound.
After signing, Northcraft went to the Gulf Coast League and had an uneven performance that would begin to characterize his career.  In 11 games, all but one as a starter, Northcraft struggled considerably to harness his stuff.  His walk rate reached 4.9 BB/9 and he hit nine guys in 40 innings.  The K rate was decent enough at 7.0 and he allowed less than a hit an inning, but you can’t walk nearly five guys every nine innings and expect much success.
In 2010, Northcraft headed to Danville as a 20 year-old and he started to show some signs of progression with the D-Braves.  He walked just nine in 58.2 innings (a 1.5 BB/9 rate) and while his K rate fell, you can be a damn good professional with a 4.22 K/BB rate.  He earned a promotion to Rome to finish the season and didn’t translate that success so well.  In four games, three starts, Northcraft was battered to the tune of 21 hits and 15 walks in 14.1 ING.  He struck out just eight batters while allowing 18 runs, 13 of which were earned.
Needless to say, Northcraft came back to Rome in 2011.  He spent the whole season with the Rome Braves, pitching in 23 games, 19 starts, and reaching the century mark in innings for the first time.  His FIP was at 4.30 for the year so I wouldn’t call the season a success, but at the same time, his walk rate fell to 3.5 BB/9 and his K/9 rate got back to 7.0.  But his bouts of wildness remained a concerned.  He hit 12 guys and uncorked nine wild pitches.  A nice sign was that his GB% rate was nearly 50%.  There were enough potentially good signs, though you would like to see some more progression.  Northcraft wasn’t rocketing up any prospect lists.  John Sickels didn’t give him a spot in the Top 20, though he did mention him in the “Others” section.
Northcraft went to Lynchburg to open 2012.  Overall, he’s been damn good sometimes and downright ugly other times.  But one thing that Northcraft has been doing very well this season is getting a ridiculous amount of groundballs to go with a high strikeout rate.  His GB% was sitting pretty at 61% coming into tonight’s 8 GB/1 FB/10 K outing.  8.4 K/9 is the best of his career, a full strikeout better actually.  Add the seven innings of tonight’s ball and Northcraft hasn’t given up a homer in 80 innings.  His WHIP is a bit high, but his FIP is damn good (2.92).
Now, given, the Carolina League is a pitching-heavy league.  Regardless, you have to take a step back and look at what Northcraft has put up this season.  He has a real shot at being a potential rising prospect for Atlanta.  Put a good infield behind him (which defensively, the ‘Cats lack…he should have been here last year to have Andrelton Simmons at short) and Northcraft has the ability to reach high levels of success.  You have to love the strikeout rate.  If he continues, Northcraft should be entering some Top 20 prospect lists after this season and in a perfect world, would have a career as a major league #3/#4 starter or nice reliever.